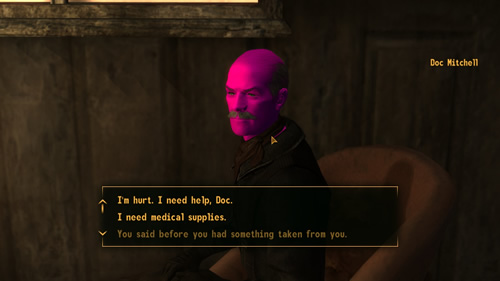 The first game I decided to play after building a new gaming PC was Fallout: New Vegas. Unfortunately, I installed both Steam and New Vegas before I finished tweaking my video drivers which resulted in some very bizarre purple/pink textures or shaders. As you can see from the picture above, poor Doc Mitchell was the first victim.

I fixed it by uninstalling New Vegas and Steam (I could have probably just uninstalled the game, but I wanted to be 100% certain), getting all my video drivers and settings properly tweaked (including the newest version of DirectX), and reinstalling. When I started the back game back up, not only were the textures and shaders correct, but I had also fixed an occasional crasher I got when the New Vegas launcher started up (which I believe had to do with the detection of DirectX).

I later came across this post which may have saved me the trouble of reinstalling. It recommends holding down “A” when the game loads until the Bethesda logo appears which apparently clears some sort of cache, fixing the issue for some Oblivion players. I have no idea if this works for Fallout, but it’s probably worth at least trying before reinstalling.