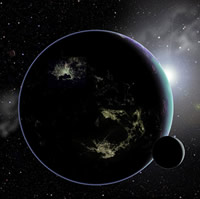 Astronomers Avi Loeb and Edwin Turner recently published a paper proposing a technique for detecting extraterrestrials: use telescopes to look for light pollution from alien cities. From the paper’s abstract:

This method opens a new window in the search for extraterrestrial civilizations. The search can be extended beyond the Solar System with next generation telescopes on the ground and in space, which would be capable of detecting phase modulation due to very strong artificial illumination on the night-side of planets as they orbit their parent stars.

I was thinking the same thing when I wrote Containment:

The telescope assembled on the far side of the Moon succeeded in capturing some stunning images, including a few faint pixels of possible light pollution originating from a small rocky planet in the habitable zone of a nearby solar system…

The SETI Institute (Search for Extraterrestrial Intelligence) is already using arrays of Earth-based radio telescopes to search for evidence of alien technology (as dramatized in Carl Sagan’s excellent novel, Contact). Since we’re already detecting exoplanets, it seems reasonable that within the foreseeable future, the technology could exist to measure light pollution on extrasolar planets, providing the first hard evidence of extraterrestrial intelligence. Perhaps alien civilizations have already detected us.

It’s fascinating to watch technologies dreamed up for the sake of science fiction gradually become reality. For instance, the idea of using the LHC for time travel, and artificial photosynthesis.