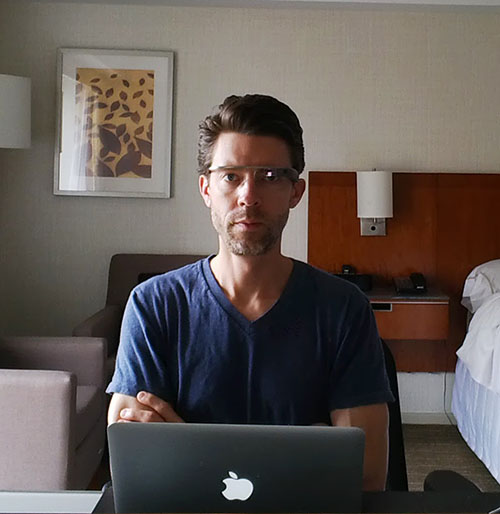 There are plenty of reviews and op-eds out there on Google Glass by now — even plenty from people who have never even worn them — so I’ll make this succinct, and try to cover observations that I haven’t seen elsewhere.

In general, I really like Google Glass. Once you get used to wearing it — once you’ve found a workflow that makes sense for you, and once you’ve come to rely on some of the functionality Google Glass provides — you don’t like being without it. You even become gradually more willing to endure the ogling, inquisitions, and the embarrassment that inevitably comes of wearing them outside the house.

Those who criticize the form factor, battery life, etc. need to keep in mind that the Explorer Edition of Google Glass is a prototype. It’s designed to introduce the concept of wearing a computer on your face, and to help developers, content creators, and consumers learn about wearable computing. Limitations aside (and there are plenty), I think the concept that Google Glass introduces is solid. I don’t know how successful the first consumer version of Glass will be, but I now believe that there are real benefits to accessing information almost effortlessly, and I think the world is probably very close to being ready for the next wave of personal and portable technology beyond the mobile phone.

Some specific thoughts and observations (in no particular order):

Update (5/26/2013): After receiving a great deal of feedback and several questions, I decided to add a few additional points:

Although I really love Google Glass, I don’t love it because it’s perfect, or because I think Google got it exactly right. I love Glass because it is an early attempt at practical wearable computing, and I think it proves that wearable computing is going to happen. Whether it happens now or in the future is hard to say. The world was not ready for digital books on a large scale until Amazon introduced the Kindle, or tablet computers until Apple introduced the iPad, so it’s hard to say whether Google is ahead of its time, or whether the Glass team is successfully creating the environment they need to drive mainstream adoption. Whether it happens now or in the near future, there’s little doubt in my mind that it will eventually happen.

Whenever I question whether a new technology will be successful, I think back to a conversation I had with a friend of mine after the original iPhone was introduced. By any definition, he was and still is an Apple fanboy, but he had no interested in the iPhone because it wasn’t very suitable to single-handed use. He was too focused on the drawbacks, and not focused enough on how the positives would outweigh the negatives. Today, he’s a big iPhone fan, and I’m sure couldn’t imagine his life — or probably even a single day, for that matter — without an iPhone in his pocket.

So to all the nonbelievers, get your jeering and finger pointing out of the way now because it may not be very long before you will be wearing something like Google Glass yourself.

5 thoughts on “Review of Google Glass”