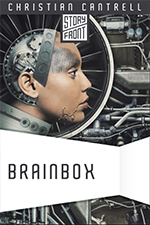 When the Earth begins cooling unexpectedly, humanity is left with only a few degrees of habitable latitude along the planet’s equator. After establishing themselves as the three remaining powers in the world, the Americans, Chinese, and Russians eventually turn on each other in hopes of securing the last of the Earth’s resources for themselves.

In an attempt to break the decades-long stalemate, the American military turns to Miguel dos Santos — a brilliant Brazilian roboticist — for help in creating the ASRA, or Autonomous Self Replicating Asset. The secret to the ASRAs is their neurological processors, also known as the brainbox, which enables the machines to “combine the logic and reasoning of a computer with the desperation and hate of the human soul.” But as Miguel reluctantly carries out his orders, it becomes clear that he has other plans for what remains of humanity.

This short story by Christian Cantrell is both a technological and psychological thriller which unfolds across a landscape as exotic and unpredictable as it is dystopian and barren.