Despite multi-touch screens, voice interaction, and science fiction’s promise of gestural operating environments, the primary ways we interact with computers are still through the firmly established keyboard and mouse. I’ve tested dozens of keyboards to finally find a couple I can claim to truly love, but the same level of passion has always eluded me when it came to mice. So when Logitech boldly proclaimed that they revolutionized the nearly fifty-year-old peripheral with the MX Master, I was in.

Let’s start with some highlights:

Now that I’ve covered the main features and promises of the MX Master, the question is whether Logitech’s new flagship pointing device actually delivers. The answer is a resounding “yes.” And “not really.” And “well…it depends.” 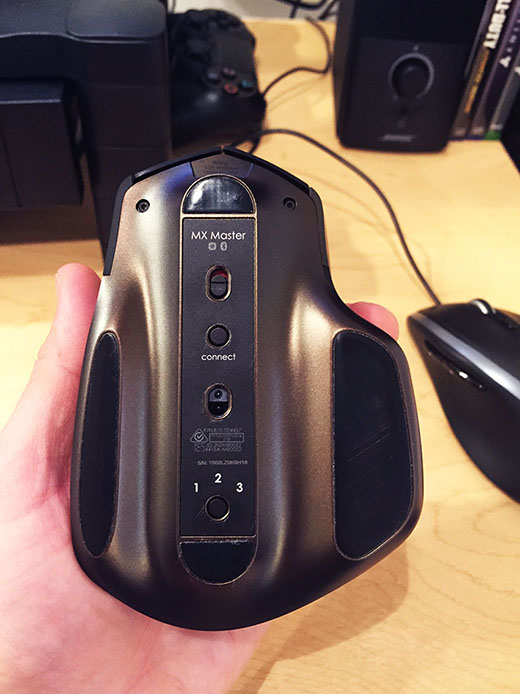 Pair the MX Master with up to three different computers.

The first thing I did with the MX Master was pair it with my MacBook Pro running 10.10.3 and install the Logitech Options application. Immediately, I was disappointed. The cursor was jerky and laggy as though the mouse and laptop were in different rooms (with a brick wall in-between) and no amount of removing, repairing, reinstalling, and rebooting would fix it. Finally I switched to connecting through the Unifying dongle, and the problem immediately disappeared. So the first thing Mac users should be aware of is that you may have to burn a USB port for the Unifying dongle to get acceptable performance. (I expect Logitech to fix this issue eventually, but if you’re a Mac user determined to connect via Bluetooth, you might want to save your receipt.)

The next disappointment was scrolling. With click scrolling enabled, documents and lists ratcheted up and down in a very non-Mac-like manner rather than flowing smoothly. Of course, that’s sort of the nature of click scrolling, so that was to be expected, but what I didn’t expect was that even with the click mechanism disengaged, scrolling wasn’t nearly as smooth or precise as with either the Magic Mouse, or with any of Apple’s trackpads. Once again, I had it emphasized to me that scrolling on OS X is designed to be done through gestures performed against static multi-touch surfaces (preferably designed by Apple) rather than third-party mechanical wheels.

I found the MX Master to be much more at home on my gaming PC. Since it’s a desktop, I had plenty of free USB ports, so dedicating one of them to the Unifying dongle wasn’t a big deal (though I did find that I had to move it up to a USB port on the side of my monitor, closer to the mouse, to eliminate all perceptible lag). With the dongle plugged into the back of my PC, and my PC a couple of feet away on the floor, the signal was attenuated enough to make the pointer almost as jerky and laggy as it was on my Mac.

Click-scrolling is de facto on Windows, so I didn’t feel like I was giving up any native behavior. Once I got the SmartShift sensitivity fine-tuned, I finally started feeling like the $100 I’d dropped was a pretty good investment, after all. While I probably wouldn’t use the MX Master for gaming (I prefer a dedicated corded mouse), I’ve been using it for everything else for about two weeks now, and every time I switch back to something else to see whether or not I miss the MX Master, I find I go back to it within minutes. 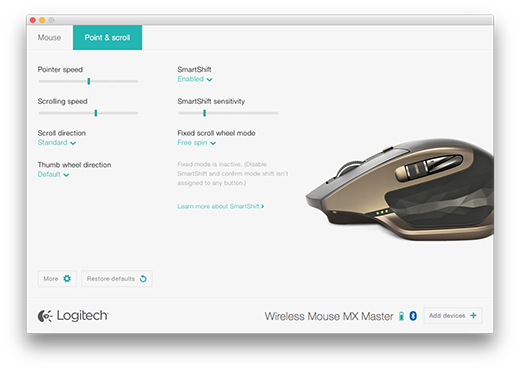 Logitech Options is one of the best third-party hardware configuration tools I’ve used.

The Logitech MX Master is excellent in some situations, and somewhat lacking in others. If you want to know whether or not you should give it a try, the list below should clarify how well Logitech prioritized your specific needs.

The horizontal scroll wheel is perhaps the best feature of the MX Master.

If you’re looking for a quick answer as to whether or not you should buy the MX Master, here’s all you need to know: