Update (1/13/2017): Although Google still sells the OnHub, it looks to me like it’s being replaced by Google WiFi. Fortunately, they work together so I can add Google WiFi devices to my network without having to replace my OnHub.

Update (4/25/2016): The OnHub now has support for guest networks. (I’m back to only having to use one router again.) You can even allow your guest network to have access to streaming devices like the Chromecast and Chromecast Audio. Thanks, Google!

Whenever Google dabbles in hardware, I pay attention. And whenever anyone claims to be rethinking not only an ubiquitous consumer electronic, but an entire customer experience, my curiosity is piqued. Google’s OnHub project is both.

I went with the model from TP Link since it was the only one available at the time I was buying, but the model from ASUS looks similar enough that I wouldn’t expect major differences. Here’s a breakdown of my experience with the OnHub so far.

Simple and elegant setup. I’ve configured more than my fair share of wireless routers in my time, and the OnHub was by far the easiest. In fact, I’d say the OnHub is the only Wi-Fi base station I’ve seen that anyone who knows enough to know that they need Wi-Fi can easily figure out. 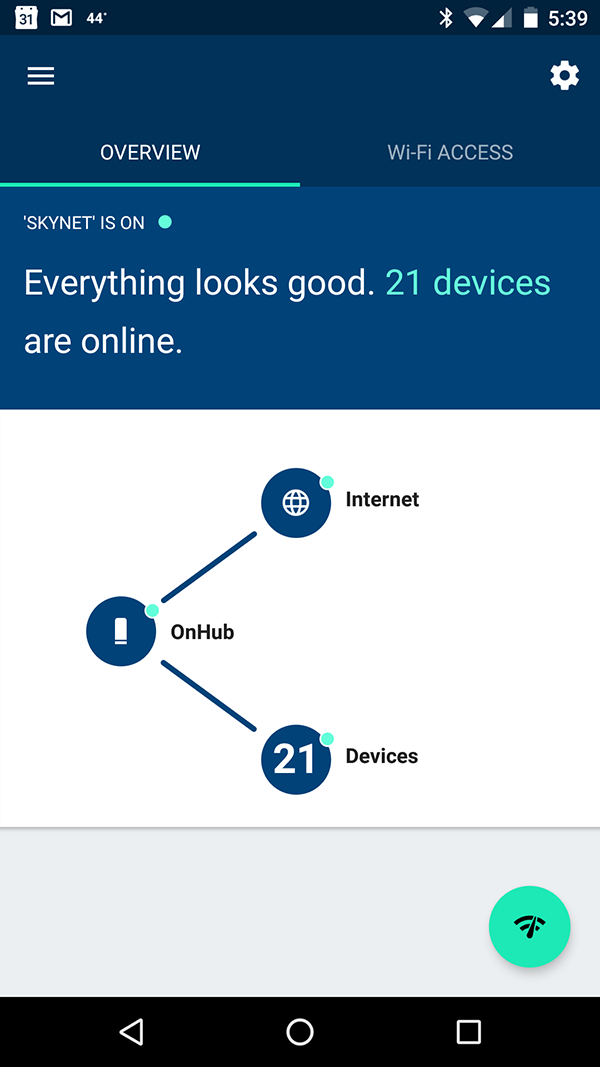 The Google On app provides a nice friendly interface.

Great interface. I really like that you can configure and interact with your OnHub through an app on your phone (iOS or Android). And the app is fairly well designed. It even has a built-in speed test, and since both the app and the router receive automatic software updates, I expect both to get better over time. 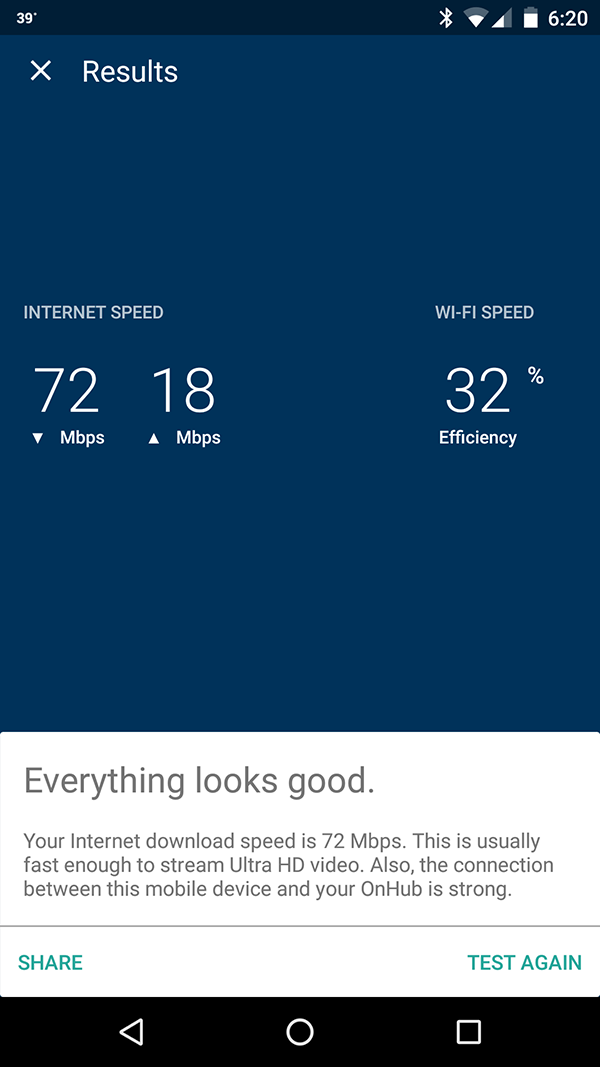 The built-in speed test is a really nice touch.

Nice looking hardware. The base station I hoped to replace with the OnHub was an Apple AirPort Extreme, and while the AirPort certainly isn’t an eyesore, the OnHub is more subtle, in my opinion, and integrates into the decor of a common space much better. (While it looks a tiny bit like a parabolic nuclear power exhaust stack, I personally dig it.)

No guest network. I’m fairly security-conscious, so I don’t like giving out my Wi-Fi password to everyone who stops by. I also go through electronics ridiculously quickly which means I’m constantly selling phones, tablets, laptops, etc. on Craigslist, and just about everyone who comes over to buy something wants to connect it to my network to test the device out. I might need a guest network more than the average household, but I feel like having an SSID that’s isolated from your main network is a security best practice, and something I would consider to be a critical feature on a new piece of networking equipment. (I’m currently using the Apple AirPort Extreme that I’d hoped to retire as a guest network.)

Poor industrial design. The TP Link OnHub looks good (I might even call it attractive, for a Wi-Fi router), but it’s actually not designed all that well. It only has one additional ethernet port (which I filled right away with a Philips Hue hub, so now I’m out). But even worse, because the cover comes down over the ports in the back, you have to use the included, extra-pliable ethernet cables which means if you need something longer than what they supply, you’ll have to go through an additional switch. Very shortsighted, in my opinion. (Note that the ASUS OnHub has a big hole in the back of the cover to address this ridiculous design decision.)

The horribly designed back of the TP Link OnHub requires that you use the included, extra-pliable ethernet cables. No wonder they printed a :( right on the cover.

Performance. I haven’t noticed any difference whatsoever in the performance of my network since moving everything over from the AirPort Extreme to the OnHub. In fact, since I have both networks up at the same time, I’ve tested their relative signal strengths in various parts of the house, and found them to be more or less the same (in some places, the OnHub beats the AirPort Extreme, and in others, Apple wins out). My guess is that if you’re using hardware provided by your ISP, the OnHub will perform much better. But if you’re already using something premium like an AirPort Extreme, I don’t think you’re going to see an improvement.

Network prioritization. One of the most interesting features of the OnHub is that you can easily prioritize specific devices (which get real names in the app rather than useless MAC addresses). I was excited to give devices like my Roku, Xbox, and Playstation priority over things like phones, watches, and appliances… until I learned that prioritization is temporary (one, two, or four hours). While it’s nice that I have the option of prioritizing one device over another when I really need it, I’d like to be able to set a permanent preferred prioritization—especially because pulling my phone out, opening the Google On app, navigating to the right screen, then changing device prioritization will only add to the annoyance of a video that won’t stream properly. (Note that the one new feature of the ASUS OnHub is something called “Wave Control” that is supposed to enable you to increase the signal and bandwidth to a specific device by waving your hand over the top of the base station, but given that your router will likely be in another room—and given the fact that CNET says it doesn’t really work—I’m not sure that’s the answer.) Google claims that the OnHub learns about device usage over time, so it might be that this is already happening in the background, but if it is, the app doesn’t give me any insight into what it’s learned about my network. (Google: consider this a feature request.)

Whatever. Just tell me if I should buy it or not.

Don’t buy the OnHub if:

Update. Looks like guest networking is coming. One of the great things about having a router that auto-updates is that you can expect it to get better over time. Thanks, Patrick!

@cantrell Nice review. Thanks! Couple of comments: 1) Many customers see improvement on range and coverage, 2) Guest network is coming soon.