You are almost certainly here because you Googled something like “Can you plant paphiopedilums / lady slippers / venus slippers in lava rock?” And the answer is:

Yes. Yes you can.

Or at least I’ve gotten away with it. Lava rock is my medium of choice since it means less repotting, and because it creates a nice heavy base that can usually keep an orchid from tipping over when it blooms profusely. So when I needed to repot my two paphiopedilums, I decided to give lava rock a try.

Unlike phalaenopsis (or “moth orchids” — what most people think of when they think of orchids), paphiopedilums are not epiphytes which means they don’t grow in trees. Rather, they are semi-terrestrial which means they grow in loose medium like leaf litter and can therefore tolerate more moisture. Lava rock dries quickly, so I was worried I would have to water them daily.

But soaking them once every three days or so seems to be sufficient. I use distilled water with a balanced fertilizer (7-8-6), and I soak them for about fifteen minutes — long enough to get the other plants watered. Shortly after making the transition, they began blooming even more robustly than they did before. 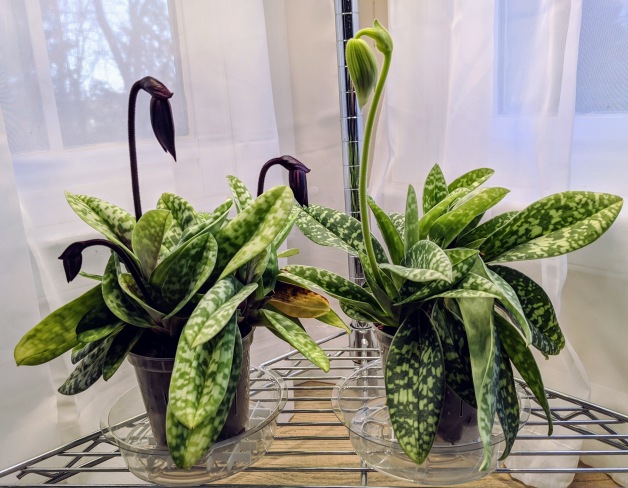 Cerberus and the swan.