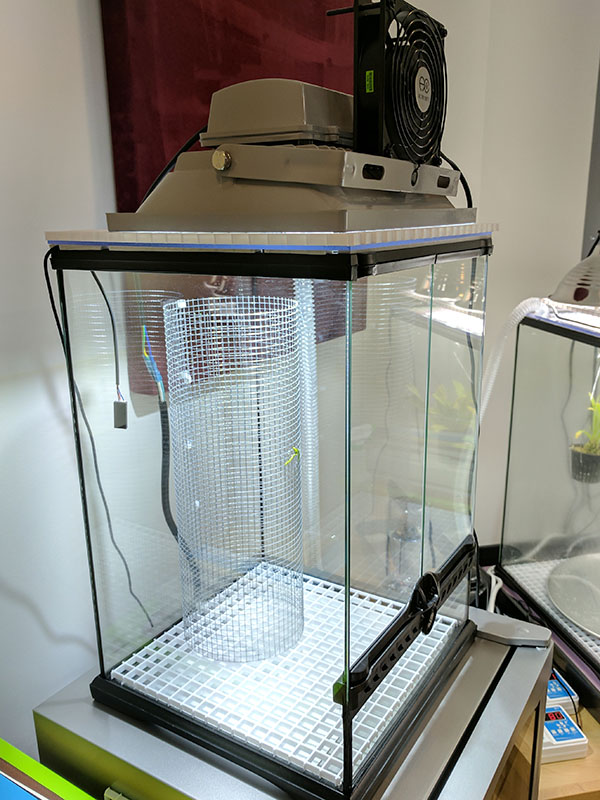 Now that I’ve had some success with Dracula orchids, I’ve decided to take on a new challenge. In fact, this might actually be the challenge when it comes to orchid growing: Dendrophylax lindenii, better known as the ghost orchid.

Ghosts only grow in humid, swampy forests in Florida, Cuba, and the Bahamas, and are classified as endangered. In fact, there are only about 2,000 left in all of Florida, and the locations of most of the best specimens are kept secret in an attempt to prevent poaching.

What I find most challenging about ghosts is their limited palette for expression. Becoming a good grower of orchids (or any other type of plant) means observing tiny changes in behavior, sometimes over long periods of time, as expressed primarily through leaves, roots, stems, and blooms. However, ghost orchid seedlings have tiny roots, no leaves, obviously no blooms, and a dramatically reduced stem. And if that’s not challenging enough, they’re naturally very slow-glowing. That means by the time you’re able to observe a problem, it might very well be too late to correct for it.

I got my first ghost at the beginning of the year, and I’d classify it as “stable” (certainly healthy, but barely growing). I used to have two, but the second one I ordered was damaged in transit when it was delayed due to a snow storm and exposed to freezing temperatures for too long (they should be shipped with a chemical heat pack during the winter; this one was not). Now the trick will be to make small adjustments in light, humidity, temperature, fertilizer, etc. until I see it start to thrive.

Many updates to come (hopefully). 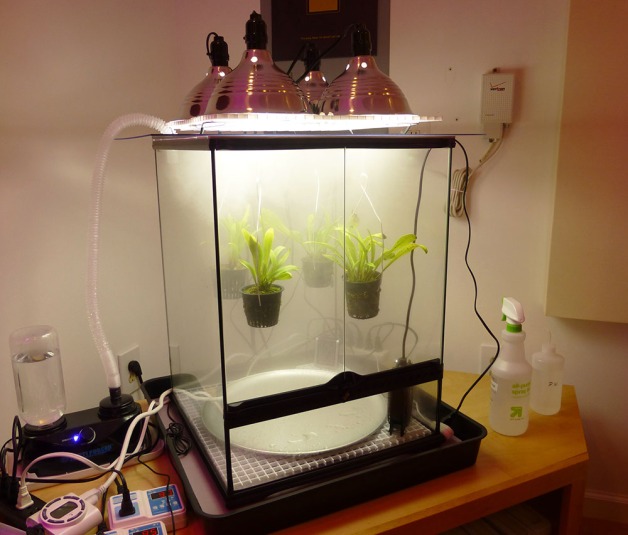 I’ve been casually growing orchids for a few years now, but things got more serious in October when I decided to take on Dracula orchids (often called “monkey-face orchids” because many of the blooms resemble little faces). Draculas are not “windowsill” orchids because they have very specific environmental requirements. Most grow in high-altitude, South American cloud forests which means they need:

If those weren’t challenging enough conditions, half my collection blooms from below rather than above which means they need to be potted in baskets and suspended rather than arranged on a shelf. In other words, these are some of the most difficult orchids to grow in completely artificial, indoor conditions. (I actually have a couple of orchids that are proving even more difficult, but I’ll save those for another post).

Once I feel I have the process of growing Dracula orchids in a terrarium perfected, I’ll write a detailed article accompanied by a video. But for now, I want to report that I am having some very solid success. Not only am I seeing new growth with all my Dracula orchids, but my Dracula olmosii just bloomed. I’m particularly proud of the olmosii because it was nearly dead when I got it, having spent several months in a greenhouse that was far too hot.

I think it’s really interesting that the orchid that was in the worst condition when I got it was also the first to bloom.

Peek inside the bloom of a Dracula olmosii orchid and you’ll find a little face peeking back out at you.